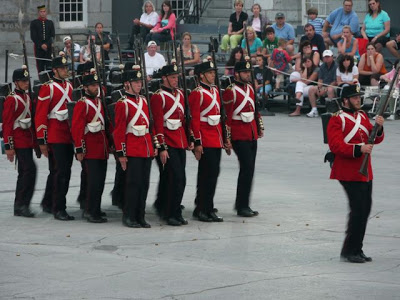 As soon as we saw the battle re-enactment by the Fort Henry Guard (pictured above) last summer, inspiration struck the Boy like a ball out of a canon. He declared that HE was going to be a British soldier, circa 1860, for Halloween!
Fast-forward to last week. Despite all this fabulous warning, I managed to leave the costume-making to the last minute. As usual. Consequently there has been a veritable flurry of red and black sewing and crafting activity over the last few days here at my little house!
Before any actual sewing began though, I figured I’d go out and find a soldier pattern because admittedly, sewing (for me anyway) is always easier with a pattern. So I scoured the pattern books at the fabric shop finding exactly ZERO soldier patterns of ANY kind. The pattern companies are pacifists apparently. I wouldn’t normally have a problem with this except that I know my 6-year-old. He was hell bent on being a soldier. And nothing else would do.
So in desperation I bought this. Burda 2461. The Prince/Amadeus costume. It would have to do. With a little tweaking this would become a circa 1860 British soldier costume. 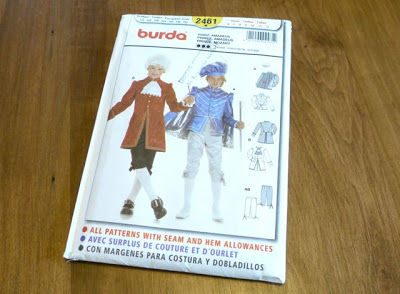 Luckily, no pants had to be made. I just hand-dyed a pair of the boys pants black and added a ribbon down the side. Check.
For the jacket, I used the Amadeus section of the pattern and nixed the jabot and any other frilly enhancements. What in the name of crème brulée is a jabot, you ask? Yes, I asked myself that same question. Well let me tell you. A jabot is like a really frilly ascot. Any soldier worth his salt would NEVER wear a jabot. This would be a serious faux-pas (in my opinion). So, no jabot. But I added some felt embellishments on the jacket shoulders and cuffs, added ribbon here and there, and made a white belt.
I did not buy footwear. I just painted a pair of hand-me-down running shoes black. That was easy! 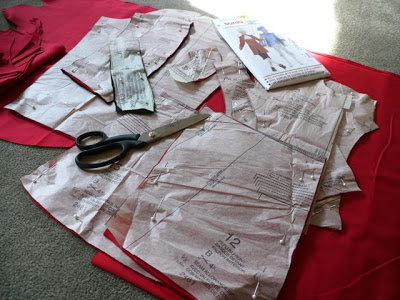 And for the helmet, I took one of the Boy’s plastic fireman hats (he has many) and transformed it into a more soldier-ly helmet as shown. I then adorned it with a felt and paper badge, and a plume made from a Kinder Surprise container and a wooden skewer. That’s what you would’ve done, right? 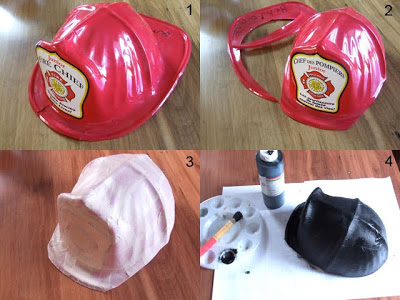 And here is the completed costume! The boy loves it thank goodness. He would have worn it to bed had I let him. But I didn’t. What a meanie, eh? 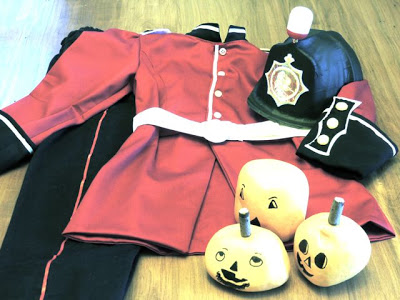 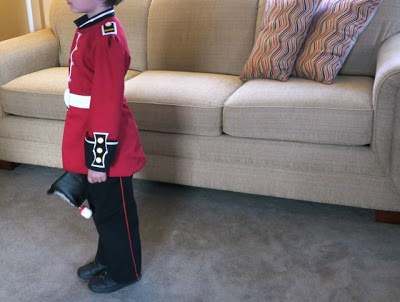 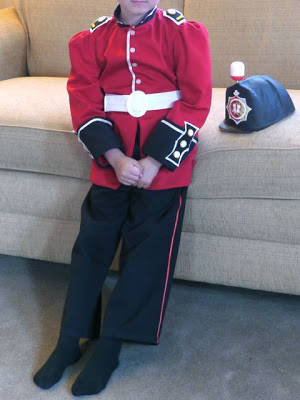 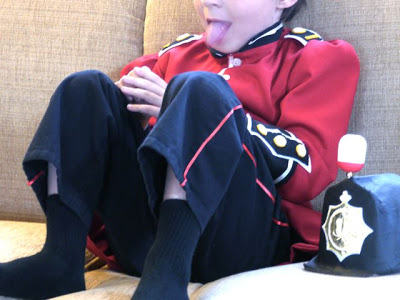 In this last pic, you see the little felt ammunition pouch that I added to his belt. 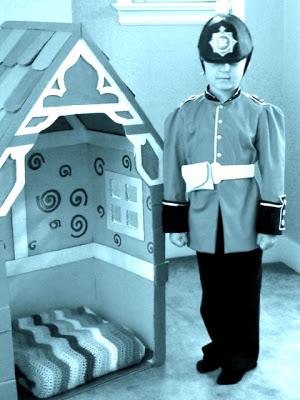 No one can resist a man in uniform… especially mommy!
Have a great day, and Happy Halloween!
Previous Post: « House of Card…Board Boxes
Next Post: Blogger’s Quilt Festival Entry: So Early in the Morning »