What follows is an interview I had with The Boy regarding his collection of little green houses which I made into the following garland: 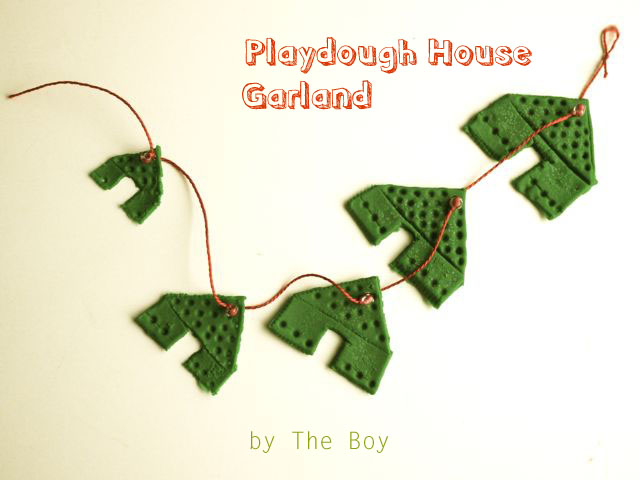 Michele: I was wondering if I could ask you a few questions about the houses you made. It’s for the blog… Would that be alright?

Michele: When did you make these little houses?

Michele: Quite a while ago then… Did anyone help you make them?

Michele: What are the houses made of?

Michele: Why did you make this collection of playdough houses?

Michele: Crafts are a good way to keep busy, that’s for sure. So where did the house idea come from?

The Boy: I don’t know where it came from. I was playing around with the playdough and the houses just popped out.

Michele: I can relate to that. Can you describe how you made them?

Michele: I use butter knives a lot in my crafts too… What gave you the idea to make the houses progressively smaller?

The Boy: That’s so easy. Each time I used up some of the dough to make a house, I had less and less dough, so the houses kept getting smaller and smaller because I didn’t have enough dough to make them exactly the same size.

Michele: I love all the different sizes. In fact, I really love your little houses period. Do you?

The Boy: I like the little bumps. And they sorta have these little dots that look a little bit like snow but it wasn’t me who made the snow. It just appeared out of nowhere or else maybe some sort of chemical reaction happened when the dough dried out. But I don’t know.

Michele: Well, thank you for telling me about your little houses.