Well the boy is done school for another year! Kindergarten: check! So the afternoon of his first day off was spent indoors (it was c c c cold) making the following little craft: paper plate pouches! I do not know where we got these paper plates but I’m pretty sure they’ve been around for, like, a decade, and we finally bit the bullet and used them for something fun!
Here’s what we made. Two pouches. The house pouch belongs to the boy, and the stripy pouch is mine. Of course I had to make one too… (I am still a little girl on the inside.) 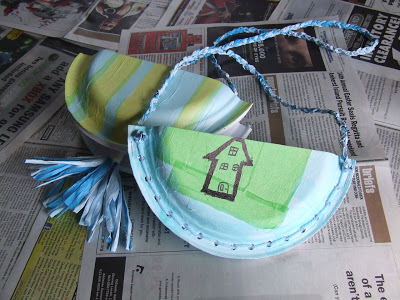 What we did. We took some paper plates, some old paint brushes, some glue and some tissue paper (which I do NOT throw out because it comes in handy in so many crafts.) 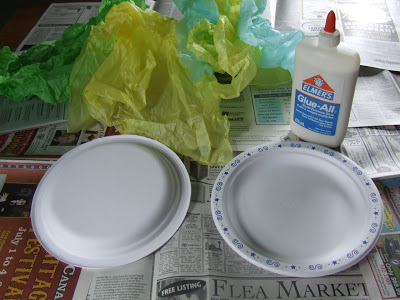 Brushed on some glue, undiluted. (The boy made this craft with his broken arm and managed. I helped where he struggled.) 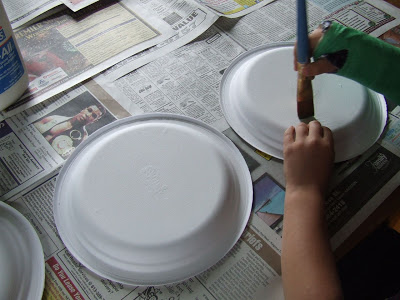 We covered the whole plate with ripped strips of tissue paper. Here’s his plate. 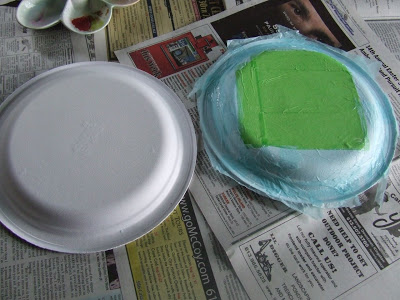 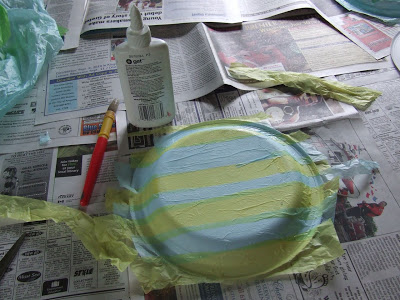 Here they are together. We waited until they dried which didn’t take long.

Then we drew a line across the centers of both our plates. 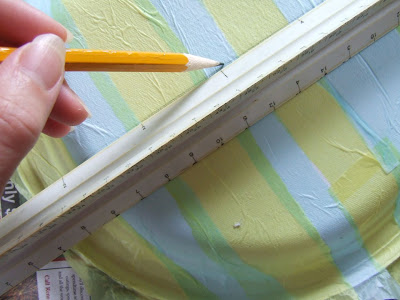 And cut them in half with scissors. We trimmed the edges here too, by the way. 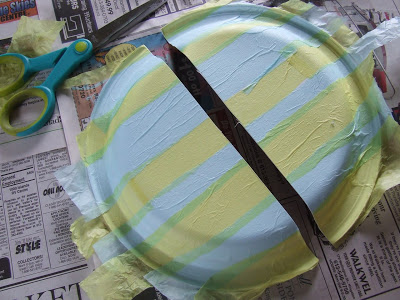 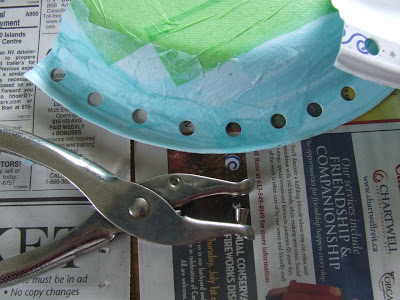 We then put some dots of PVA glue on the inside edge of one half and glued both sides together to make a pouch. 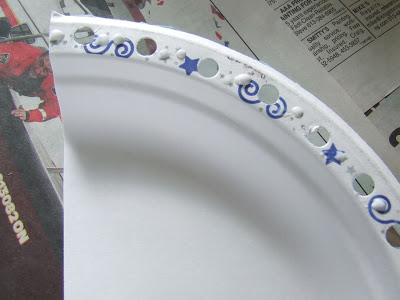 With a yarn needle and a piece of yarn, the boy ‘sewed’ the 2 plate halves together. He really did not want help here! Apparently he already knows how to sew goshdarnit! He did a running stitch all the way around and back again! 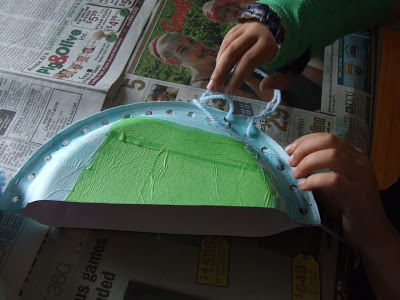 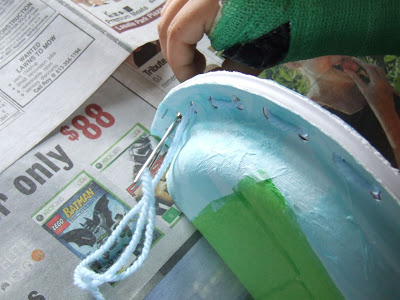 And then, I cut up a plastic bag into strips and made a braid to use as a strap. We then attached it to the pouch with a couple of knots. (I used the first perforation on either side to attach the strap). 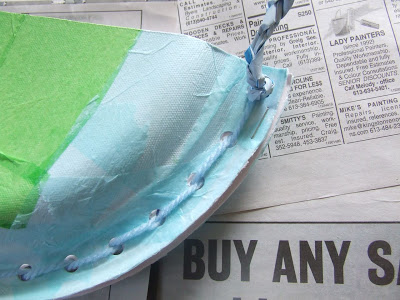 And finally, the boy decorated his pouch with a little house drawing, and he was done! 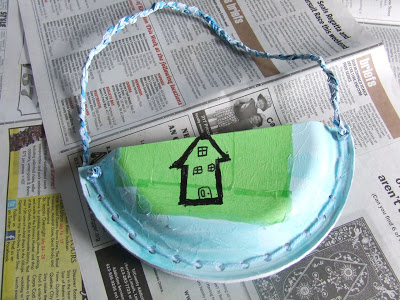 I needed 2 paper plates for my pouch. I had already cut the first one in half, and had to cut the second as well. So drew a line. 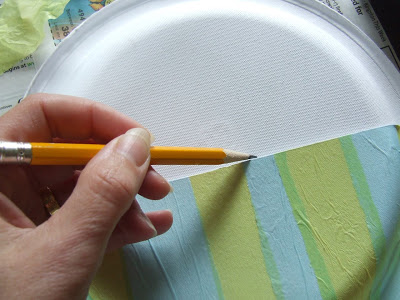 And cut the second one in half. I chose not to decorate the second plate but I could have. 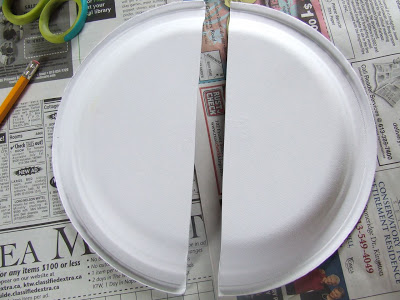 I put some glue on the back side of one of these white halves.

And glued the back sides together as follows. 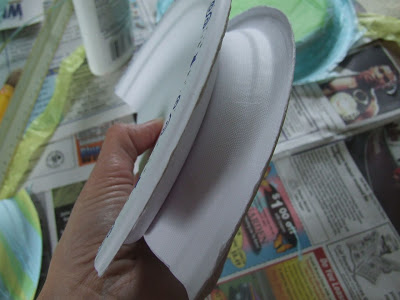 I then put glue on both outer edges of the white halves. 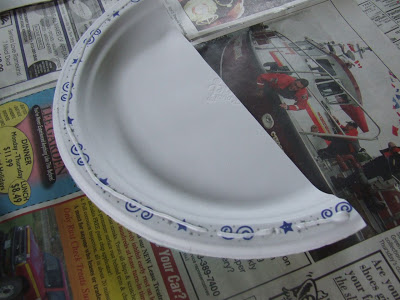 And glued on the stripy halves to form this double-pocket pouch. 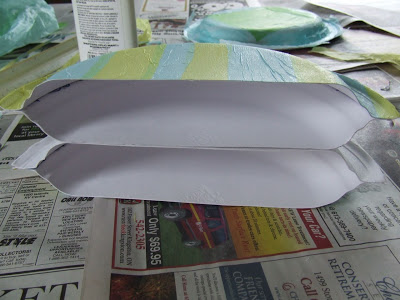 I added sticky tape along the center joint for strength. 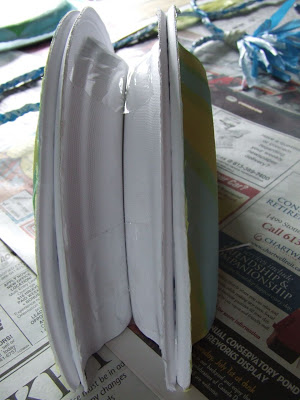 I made another braid out of plastic bag strips and made a tassle at the joined end. 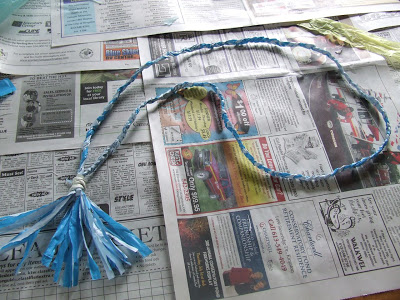 I put a bead of glue at the center joint. 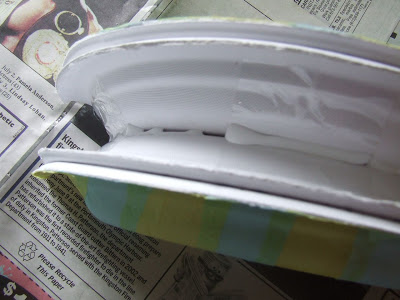 And placed my braid with tassle down in the glue along the joint. Waited for the whole thing to dry. 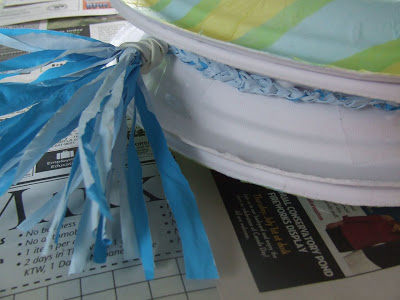 And that was that! 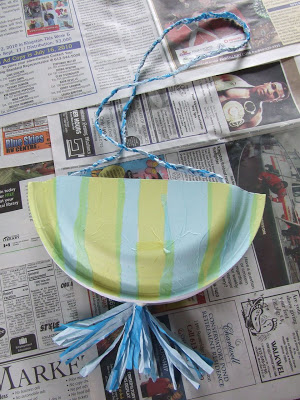 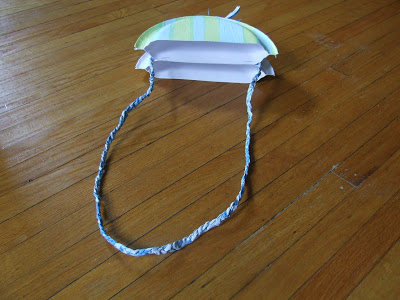 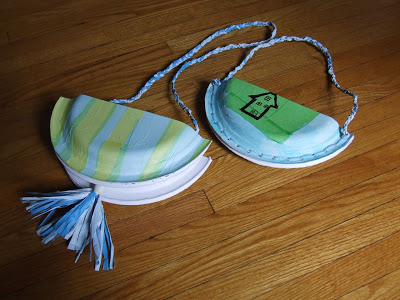