Welcome to a new crafty series, Series 4 – The Candy Wrapper Chain #1!
Let me begin by saying this:
I lead a sheltered existence.
See, until last Friday, I hadn’t yet heard of the allegedly famous candy wrapper chain. It was only when my artist and blogger friend Cathie a.k.a. Clevelandgirlie was kind enough to enlighten me on the subject, that my whole world opened up to the enormity of these alluring little chains. 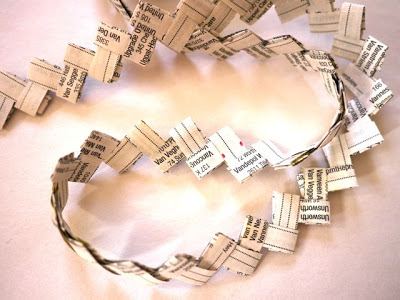 You, of course, already know about the chains. And obviously, you know about this guy, Gary Dushl. Of course. He’s the guy who has single-handedly built the longest candy wrapper chain in existence. I would wager it’s the longest handmade THING in existence made by a single human. More than likely, right? I mean, he started in 1965, and he’s still going strong 46 years later, so… yes, probabl-ee. Isn’t that something? Isn’t that 12 and a half miles or roughly 20 km of something? Holy mackerel, I wasn’t even alive when he started. Like, holy mackerel, eh? 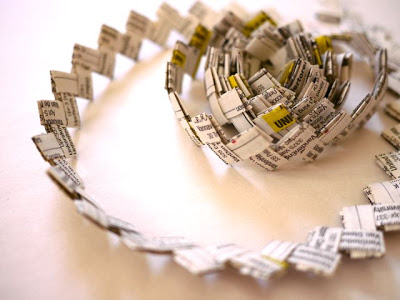 And also, you already know how to make the candy wrapper chain. It’s not like it’s new or anything. Right? But just in case you – like me – are also 46 YEARS behind the times, here is a video tutorial that shows you how to make them.
So, I’ve spent a little time since Friday playing catch up. I know. Kinda late. Nevertheless, I’m happy to report that I’ve learned how to make the chains! Yessirree! Except I made mine out of the telephone book because I used up all of my candy wrappers making these.
And, I love them… They are so pretty and useful!
For example, my chains have already doubled as ribbon! 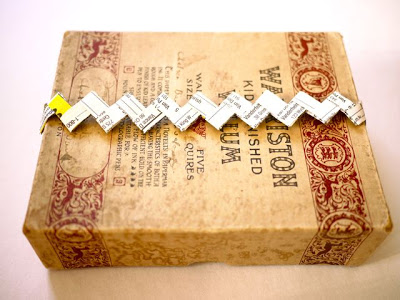 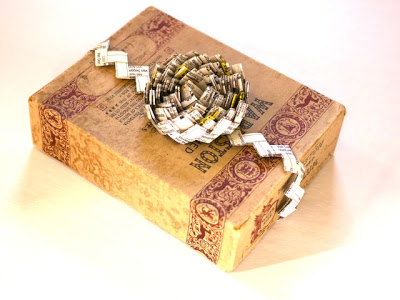 It looks sort of like an artichoke, or something mildly vegetable-y, don’t you think? 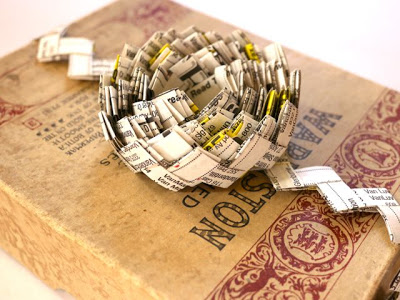 There are people out in the world making wondrous things like bracelets and bags and baskets, and probably intergalactic space vehicles as well, all out of candy wrapper chains. Just google candy wrapper chains, or gum wrapper chains. You’ll see. It’s pretty amazing stuff!
Thank you Cathie for catching me up with the times. Is there anything else I should be aware of? Anything? No flying cars, or household robots that make bread? If, so, I’d love to hear about them!
Oh, and, by the way, I’m not done. You haven’t seen the last of the candy wrapper chains here, no no. No no. This is just the beginning, see. Series 4: to be continued here!
Now have yourself a fabulous day, and I’ll see you again soon!
Previous Post: « The Valentine Factory
Next Post: From the Land of Blog »