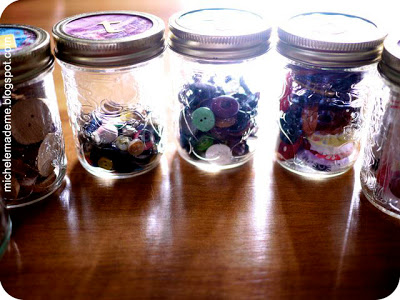 Remember last week’s recyclables post? That was me starting to organize my mounds of junk, attempting to bring some order to my workspace. I’m hoping to eventually come to a point where I can share my basement craft zone with you. Note the use of the word “eventually”… Let me just say this. I spend my days somewhere between clutter and chaos. The whole order thing is a teensy bit of a struggle. I’m forever making. Cleaning rarely comes into it. But I’m trying to change that. Here are my baby steps…
Buttons. IN JARS. With letters on them. That spell B-U-T-T-O-N-S… The buttons used to be in a bunch of different places. I couldn’t see them and never used them because I didn’t ever think of them. Now they are in plain sight on my work table, and I have actually used them on a few projects. Exciting stuff!
Yes, so I just threw the buttons in some canning jars we had kicking around, covered the tops with junkmail pictures, and topped them off with some letters I cut out. 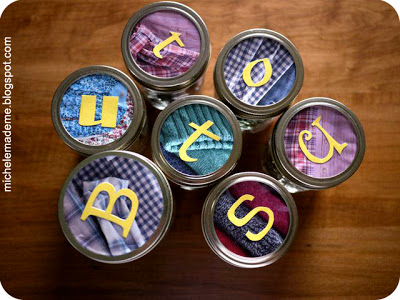 Next, I organized what used to be a literal rat’s nest of embroidery thread in a painted egg carton. This way it’s no longer a mess of knots, I can see all the pretty threads, and all the similar colours are together. It’s only about a million times better this way. 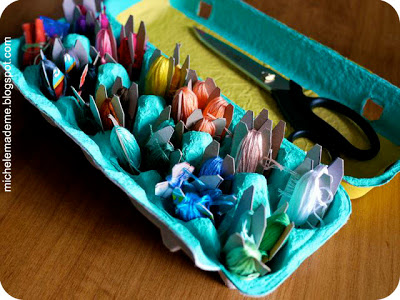 Just a few little steps toward the workspace sanity I long for… but the progress is actually satisfying, you know?

Well, you have a lovely day now. I’ll be back here on Friday!
Previous Post: « Fab Festive Footwear
Next Post: Juice Cap Ornament & Pendant in the Shop! »