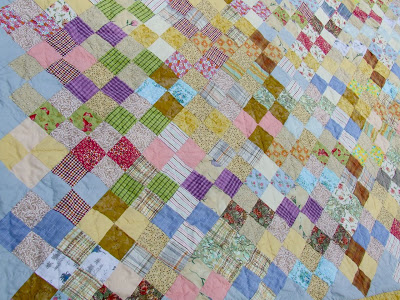 Once again, it’s time for the Blogger’s Quilt Festival at Amy’s Creative Side! It’s my second time joining in all the quilting loveliness and this time my entry of choice is the first quilt I completed as a full-fledged blogger. Yippee!
I call it “So Early in the Morning”. Thusly named because for a while I was suffering from insomnia and found that the hand-quilting was a quiet yet comforting thing to replace sleep so early in the morning. BTW, I’m cured and sleep has returned!
Recommendation: If you want to hand-quilt a whole quilt in a short period of time, don’t sleep, and it will get done lickety-split. 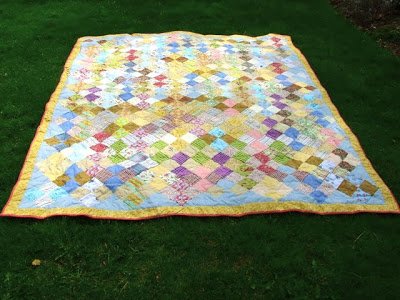 Completed at the beginning of May 2010, it is (obviously) a very simple quilt. Modern in a way but old-fashioned too, I think. Four-patches on point as you can see. Hand-quilted along the diagonal of each little square. The design was inspired by this Kaffe Fassett quilt, though I didn’t quite follow his pattern leaving the design more to happenstance than his, and refraining also from adding a border. The backing is flannel which gives the quilt a lovely weight and warmth. 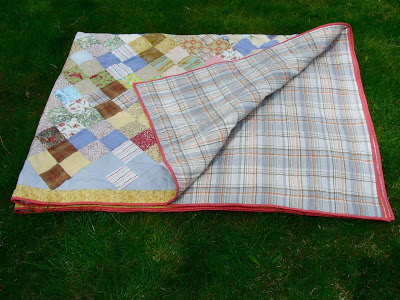 Probably my favourite aspect of the quilt other than the hand-quilting (which isn’t fully apparent in these photos, goshdarnit) is the binding. I love it! It’s soooooo PINK! And, as it turns out, I like pink. I never knew…
Originally meant to cover mine and Lo’s bed, it now resides on the bed in the spare bedroom. Unfortunately, it was too small for ours, sigh. But it looks fantastic against the bright orangey-red walls in that room and there, by gum, is where it’s staying. (Don’t ask about the wall colour. That’s a whole nother story.) 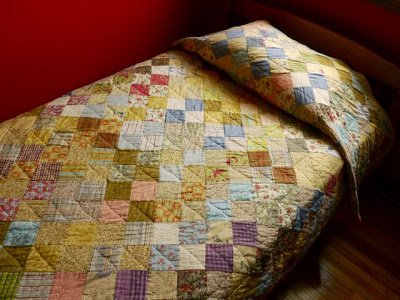 So there you have it: the simple yet pretty “So Early in the Morning” quilt!

Now you go have yourself a fantastic evening, and Happy Halloween!
Previous Post: « A Man in Uniform
Next Post: The Mailman Cometh! »