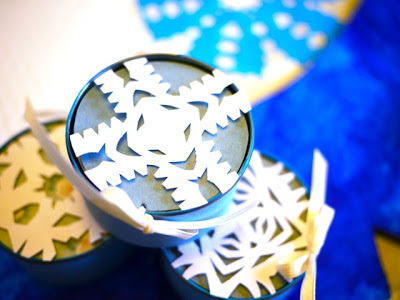 If you remember yesterday’s post, you’ll know that the boy (who’s 6 years old) and I were busy busy working on our little Advent Calendar. This is our very first handmade Advent Calendar! I know, crazy. Before this year, we’ve always bought them, tisk tisk. It was never on my radar before… But with the “advent” of the blog (chortle), I’ve been inspired by so many amazing crafters and their amazing Advent concoctions! So I thought I’d get the boy involved and create one of our very own design and making. 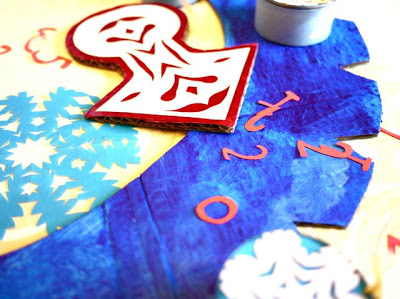 I sketched 3 different possibilities and passed them by the boy. He, being president of Everything, chose the final design: the Advent Clock Calendar. Here you see it partially made, most of the components ready for assembly. 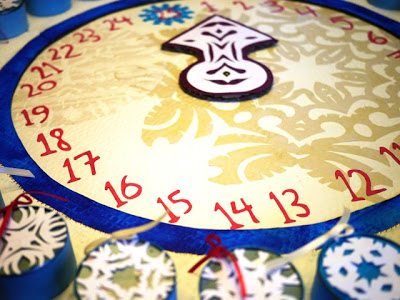 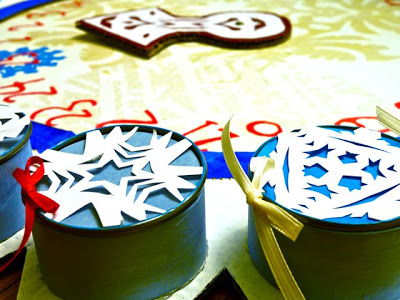 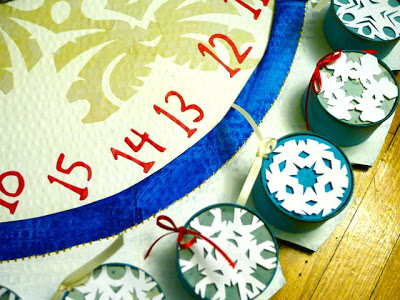 It is made out of a large cardboard box, frozen concentrated juice containers and their metal lids, some ribbon, a piece of newsprint, a few bits of used giftwrap, some regular white paper, paint and Mod Podge.
The boy is a snowflake expert (he was making snowflakes back in the womb) so he helped with the lid embellishment including the cutting of circles of paper and of all those little snowflakes that you see on the tops of the juice lids. He also penned all the numbers which I then cut out. I’m darn fond of The Boy Font, and use it whenever possible. It’s got character, ya know?
We got Lo involved by forcing him to poke holes in things and by sending him out to get the goodies for the little snowflake cups.
Today I put it all together and spent some time gathering Christmas jokes to add to every cup. The boy loves a good joke. Whenever he tells a joke, he always asks: “Do you get it?” and proceeds to explain the ins and outs of the joke, and exactly why you should be laughing. 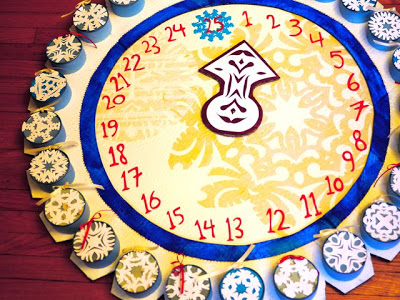 After school, he excitedly threw off his coat, hat and boots, like a flash raced to the Calendar, and swiftly found the goodies and the joke that were waiting for him. Then he begged me to let him do tomorrow’s today to which I said: “No way, José!”
Pretty sure he likes his Advent Calendar! Yay!

Now you go have yourself a lovely evening!