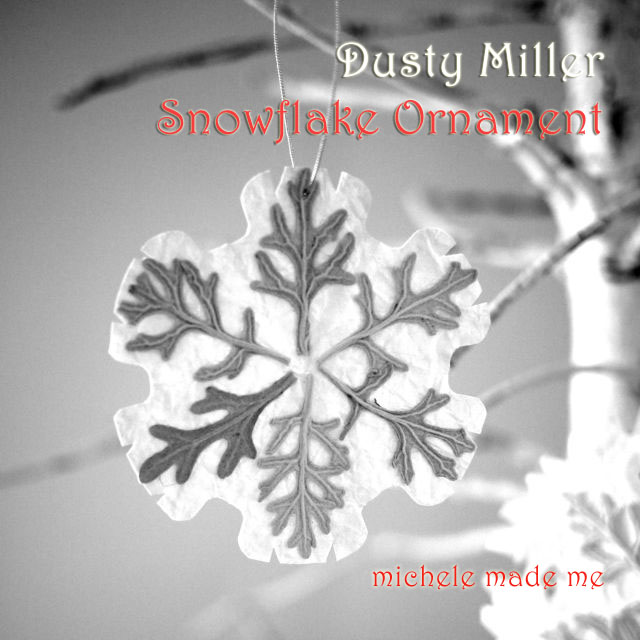 Can’t believe it. But here we are almost HALF-way through November. Which can only mean one thing: Christmas ORNAMENTS!!!

As evidenced by the last two years’ ornament series (found HERE on the Series page), it appears I can’t be happy making one style of ornament per year. No no. Once I get going, it’s a pretty much an out-and-out rampage. But it’s a tradition, see? So, let this be the beginning of the 2012 ornament series, okay? I’m starting with one of my favourite holiday motifs. The snowflake! 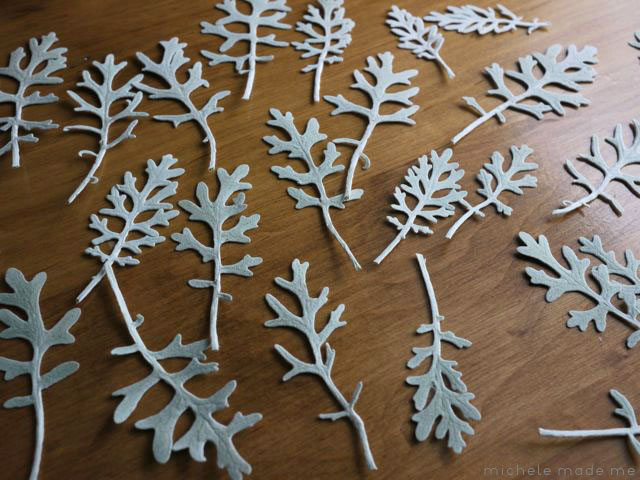 Are you familiar with Dusty Miller? It’s a very popular bedding plant here in Canada. It has these lovely, sculptural, fuzzy, silvery-grey leaves. I don’t have any in my garden but, seventeen of my neighbours do, so that’s where I got my leaves. The plants are fairly hardy and some in my neighbourhood are still alive despite the cooler weather. But as soon as we have a few nights of frost in a row, these little guys’ll be toast. I was lucky enough to get my hands on a few recently dead ones from the neighbour’s garden… Thank you neighbour!

To get the leaves ready for this craft, they need to be pressed and dried. Don’t worry it’s quick! Here’s what you do.

Pick a few Dusty Miller plants. Alive, or recently dead, it doesn’t matter. Snip off several pretty leaves. You’ll need 6 similar-sized leaves per snowflake. Iron the leaves without stream. That’s right, grab your dry iron and press the leaves flat. You may want to put something between your iron and the leaves. But I didn’t. I just went for it! Now to dry them out, you could let the leaves air-dry for several days. Or you could do what I did. I put my pressed leaves on a plate and nuked them in the microwave on HIGH for 30 seconds. And if they were not quite dry after the first 30 seconds, I put them in for an additional 30 seconds. And if you find that the tips of the leaves have curled a bit during microwaving, just give them another quick press with the iron. And now you are ready to make snowflakes!

Find 6 similar-sized leaves. Trim them all to about the same height. Get your compass and open it to a width slightly taller than your leaves. Set aside.

Take out a piece of white printer paper. Smoosh it up real good. Like, real good.

Flatten your paper again and press it with a dry iron. Draw a circle on the paper using your prepared compass. Cut out the circle.

Now to fold the circle in preparation for snowflake-making. Start by folding the circle in half. And fold it in half again but only to crease the center.

Open it up again and from that creased center point, fold the right side two-thirds up to the left across the circle as below. Now, fold the left-hand third up to the right.

Fold the whole in half again. Now, along the upper part of that final fold and along the outer edge, cut out some small shapes from the paper. Do not cut into the apex or bottom half of the circle. Little triangles and rectangles are easiest to cut out.

Unfurl your snowflake and press it flat with a dry iron. Notice the center of the snowflake is not cut up. Okay now get out your six Dusty Miller leaves.

Glue the leaves flat side down onto your snowflake shape. Make a bunch of different-sized snowflakes. Attach pretty string hangers. 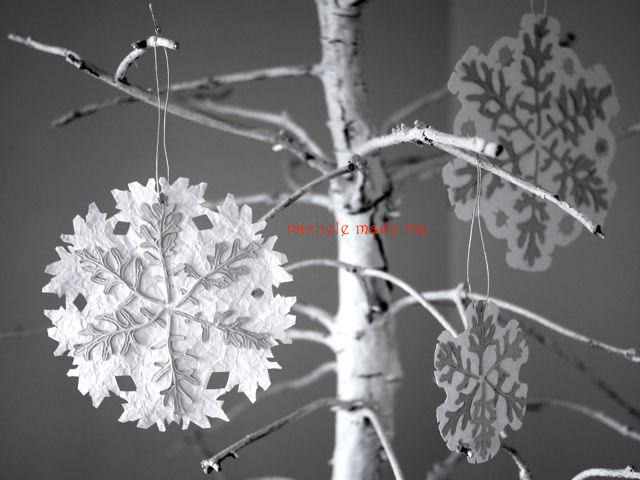 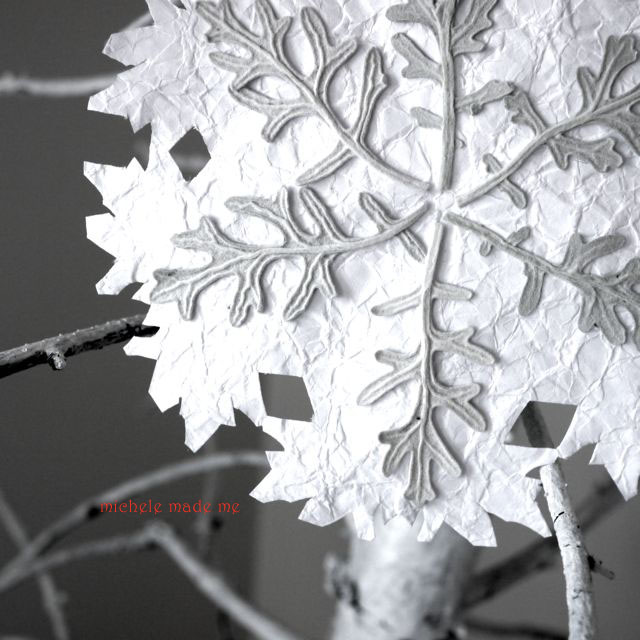 So very pretty.
♥M
Previous Post: « TRaNG Picks a Giveaway Winner!
Next Post: Have Yourself A Merry Little Christmas Ornament #2 »